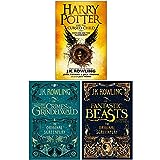 Share to Microsoft Teams
Share by Email
Follow Book
View Comments0
Please Note That The Following Individual Books As Per Original ISBN and Cover Image In this Listing shall be Dispatched Collectively:

Harry Potter and the Cursed Child Parts One and Two, The Crimes of Grindelwald, Fantastic Beasts and Where to Find Them by J.K. Rowling 3 Books Collection Set:

Harry Potter and the Cursed Child Parts One and Two:
The official playscript of the original West End production of Harry Potter and the Cursed Child.It was always difficult being Harry Potter and it isn't much easier now that he is an overworked employee of the Ministry of Magic, a husband, and father of three school-age children.While Harry grapples with a past that refuses to stay where it belongs, his youngest son Albus must struggle with the weight of a family legacy he never wanted. As past and present fuse ominously, both father and son learn the uncomfortable truth: sometimes, darkness comes from unexpected places.

Fantastic Beasts: The Crimes of Grindelwald:
The powerful Dark wizard Gellert Grindelwald was captured in New York with the help of Newt Scamander. But, making good on his threat, Grindelwald escapes custody and sets about gathering followers, most of whom are unsuspecting of his true agenda: to raise pure-blood wizards up to rule over all non-magical beings.In an effort to thwart Grindelwald's plans, Albus Dumbledore enlists Newt, his former Hogwarts student, who agrees to help once again, unaware of the dangers that lie ahead.

Fantastic Beasts and Where to Find Them:
J.K. Rowling invites you to explore a new era of the Wizarding World . . .When Magizoologist Newt Scamander arrives in New York, he intends his stay to be just a brief stopover. However, when his magical case is misplaced and some of Newt's fantastic beasts escape, it spells trouble for everyone . . .

Keeper of the Lost Cities
2.

Among the Hidden (Shadow Children Book 1)
3.

Harry Potter and the Order of the Phoenix